The band The Bluegrass Experience was active in the Triangle area of the Piedmont from 1971 until bandleader Tommy Edwards death in 2021. Members also included Snuffy Smith, Charles Lee Conard, and "Fiddlin' Al" McCanless. The band is perhaps best known for playing The Cat's Cradle every Thursday from 1972-1981. Many friendships were fomed on those nights.

Bluegrass is many things. It's fun. It's comforting. It's full of joy. But above all bluegrass is innovative.

The string band sound started to change In the late 1930's and early 1940's as bands tried to create a distinctive sound for their records. Experiments with new methods of playing the traditional instruments resulted in a fast paced music that emphasized vocals and solo instrumental leads. This new sound was called bluegrass after one of the most influential bands, Bill Monroe and his Kentucky Blue Grass Boys.

In 1945 Bill Monroe put together the famous "original" Blue Grass Boys that included Lester Flatt on guitar, Chubby Wise on fiddle, Cedric Rainwater on bass, and Shelby, NC, native Earl Scruggs on banjo. Scruggs brought with him a sensational three-finger, rolling banjo style that rejuvenated the 5-string banjo, made his own name preeminent among country and folk musicians, and helped to establish bluegrass as a national phenomenon.

A musical style is usually the product of an evolutionary and adaptive process, and Scruggs' banjo technique represented a modification and perfection of traditional banjo styles that existed in the Piedmont region of North Carolina; where it was played by local banjoists as well as professionals like Snuffy Jenkins, of Harris, NC, and Wade Mainer, who was based in Raleigh for a period of time.

The Blue Grass Boys drew liberally on the old time string band sound but, reflecting Monroe's early influences, also incorporated elements of the blues, ragtime, jazz, and gospel into a hard-driving style that was different from the string bands of the 1920's and 30's. All of the instrumentalists in the band took solos at various times, while the rest of the group provided rhythmic and melodic backup.

Raleigh is now a focal point for contemporary bluegrass. In 2013 PineCone helped facilitate the move of IBMA's World of Bluegrass weeklong event to Raleigh. The week includes the IBMA Business Conference, the Bluegrass Ramble club showcases for emerging bands, the IBMA Bluegrass Music Awards. The week is capped off by IBMA Bluegrass Live! powered by PNC. It's a festival that has become one of the City of Raleigh's signature downtown events.

IBMA's World of Bluegrass draws tens of thousands of musicians, industry professionals and fans out onto the streets of downtown Raleigh to celebrate the music. It is widely recognized as "the most important week in bluegrass." 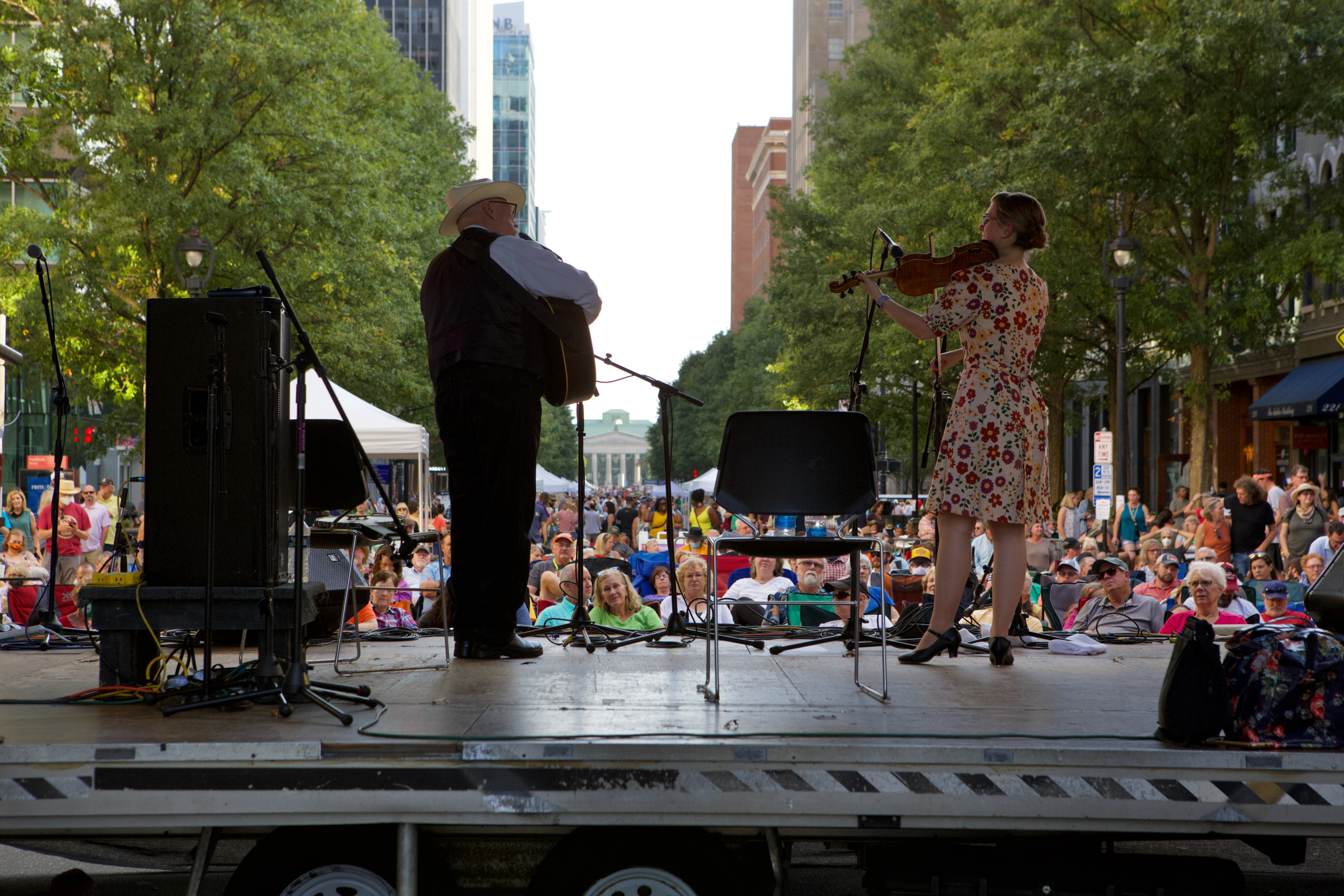 Joe Newberry and April Verch performing at the Wide Open Bluegrass Festival in 2019. The event caps off IBMA's World of Bluegrass and that year drew more than 200,000 people downtown.