In a state that is known globally for its wealth of musical heritage, North Carolina’s gospel tradition ranks among the most popular musical genres – and certainly one of the most spirited.  Every region of the state is home to thriving gospel music communities, and the traditions are as varied as the people.

In North Carolina you’ll find quartets and choirs, gospel brass bands and bluegrass, holy hip hop and sacred steel, and you’ll hear songs of worship sung in Cherokee, Spanish, English, and other languages from all around the world.

The foundations for Carolina gospel were laid as early as the eighteenth and early nineteenth centuries, as revival and camp meeting traditions spread through the South, bringing with them a growing fervor for hymnody and harmony. The German-speaking Moravians of Salem and nearby settlements had a strong heritage of instrumental religious music, including its distinctive brass band tradition, which is continued today.

The shape-note method of reading and teaching vocal music grew outwards from Upcountry South Carolina across the South in the mid-1800s, with its most loved hymnals, The Sacred Harp (1844) and Christian Harmony (1866), profoundly influencing hymn singing throughout the region.

African Americans enslaved in the South are known to have practiced four-part harmony in churches and brush arbor services at least as early as the mid-1800s.

North Carolinians distinguished themselves from the early days of the recorded music industry, with gospel artists at the forefront. In the 1930s, Mitchell’s Christian Singers, an African American quartet from Kinston, recorded more than eighty songs, and represented the region and genre in the 1938 From Spirituals to Swing concert at Carnegie Hall.

In the Piedmont, Charlotte would become an important center for recording and radio, drawing quartets and other Black sacred music artists from all over the Southeast.

Early country performers also developed rich traditions of old-time and bluegrass gospel music, much of which was broadcast from radio stations and recording sessions in Charlotte. 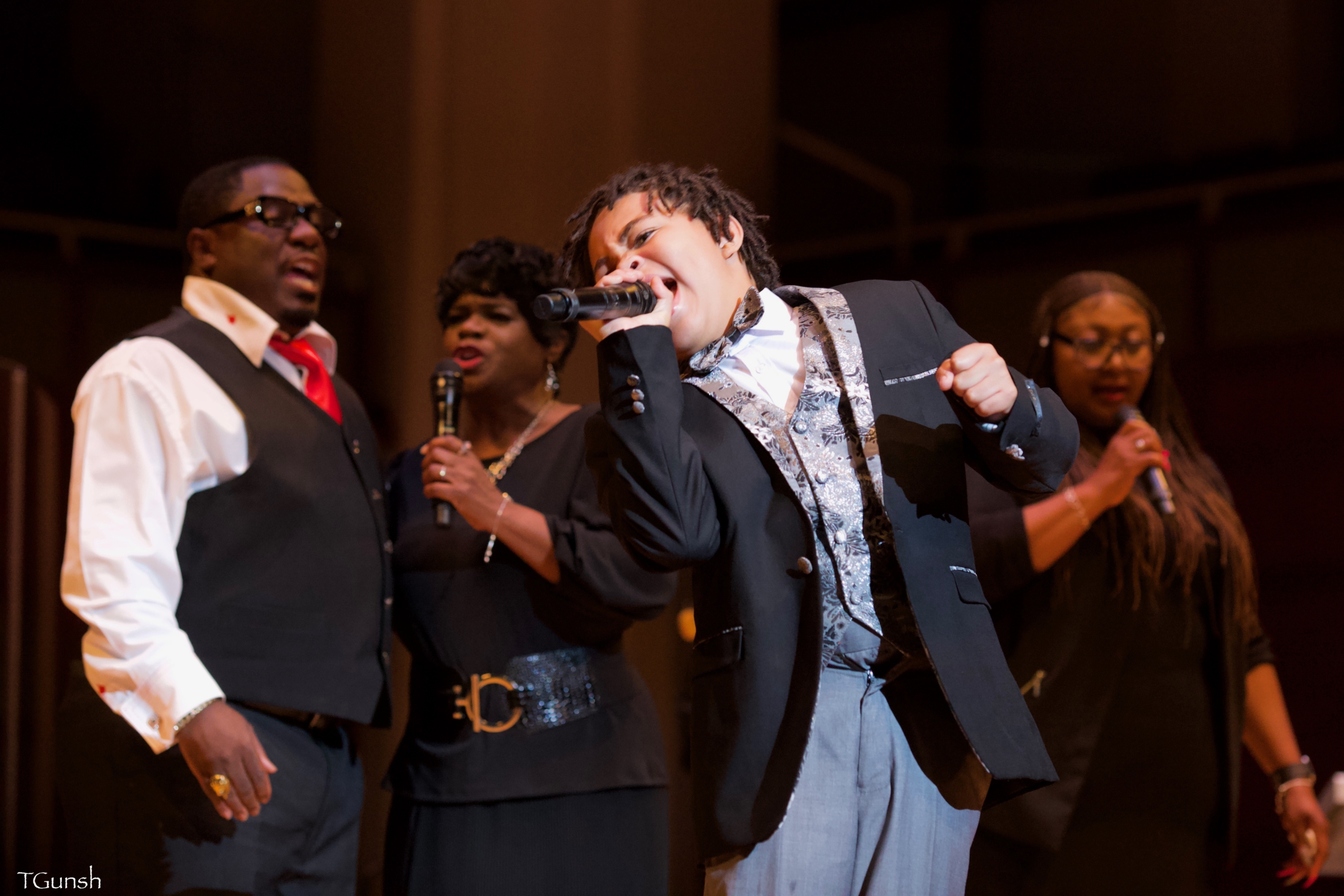 10 year old Caleb Serrano from Greensboro joined Pastor Shirley Caesar on stage in 2022 for a PineCone concert at the Duke Energy Center for the Performing Arts in Raleigh. 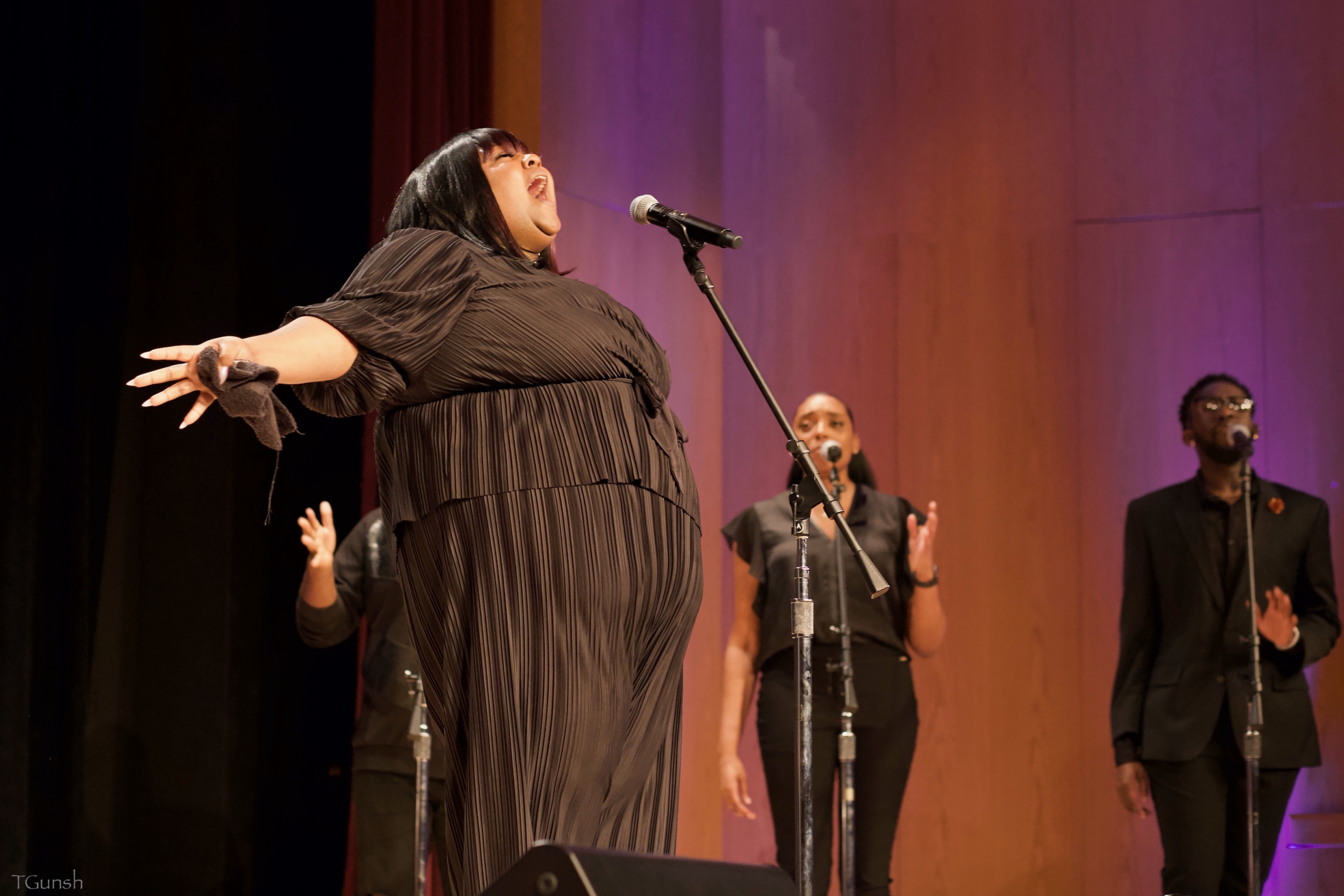 Singer Jalessa Cade performing in 2019 at PineCone's Music of the Carolina Concert Series at the North Carolina Museum of History in Raleigh.

During the second half of the twentieth century, in the rise of what has come to be known as Southern gospel – a quartet-based style that grew up mainly in rural white church settings, with diverse roots – North Carolina groups have been deeply influential.

Because of the prominence of such Western North Carolina quartets as the Inspirations and the Primitive Quartet, the Smoky Mountain region is one of the most active hubs of Southern gospel music. The tradition is also represented in the Smokies by Cherokee gospel singers, and in the eastern part of the state by Southern gospel quartets of the Lumbee Tribe.

In the twenty-first century, North Carolina’s gospel music scene is stronger than ever. Churches—Black, white, Native American, Hispanic—host quartets and bands throughout the year, and annual gospel sings are held all over the state, from the Fading Voices Festival of the Snowbird Cherokee community in the Smoky Mountains, to the State Annual Singing Convention in Benson. Recording studios, record labels, and industry associations not only promote the music but make a sizable contribution to the state economy.

In the national and even global community of gospel music fans, North Carolina is widely regarded as the home of a deeply rooted legacy, and the source of ongoing innovation and inspiration.